The Cindy Kallet Songbook plus Cindy’s three most recent solo CDs, bundled together at a $7.00 discount.

See book and album descriptions below.

To hear the songs on these CDs, follow these links: Dreaming Down a Quiet Line, This Way Home, Leave the Cake in the Mailbox.

Cindy would be happy to autograph your book and CDs. Please specify your autograph wishes in the “Order Notes” field during checkout.

Dreaming Down a Quiet Line (CD) – 13 Kallet originals, plus a traditional song and a beauty by Joel Zoss. Guests of honor: Michael Cicone, Ellen Epstein, Lisa Kallet, and Gordon Bok. Described as “entirely beautiful” by Scott Alarik (Boston Globe) and as “that rarest of releases for a singer-songwriter: 15 gorgeously crafted songs…” (Rob Wier, Advocate Newspapers).

This Way Home (CD) – A musical collaboration featuring ten of Cindy Kallet’s originals and four other favorites. Cindy is joined by Will Brown, Gordon Bok, Ellen Epstein, Michael Cicone, and others. “Kallet, quite simply, casts a spell with her unpretentious, unproduced music. Her pleasant alto voice carries her unique songs through the intellect and straight to the heart. Kallet sounds like no other singer-songwriter on today’s scene.” (R Warren, Sing Out!)

Leave the Cake in the Mailbox (CD) – A collection of original “parenting” songs as well as a few traditional favorites. A true family musical portrait, including several contributions by various family and friends. “Ms. Kallet’s gentle tongue-in-cheek separates it from other (kids) albums…Leave the Cake In the Mailbox is recommended, promising to leave both you and your offspring humming and smiling in harmony and/or unison”. (Nikki Patton, Martha’s Vineyard Times). This album won a 2004 “Parents’ Choice Gold Award.”

The Cindy Kallet Songbook – A 96-page, spiral-bound collection of 32 of Cindy’s original songs and instrumentals, lovingly transcribed by Cindy herself. Included in the book are vocal melodies, lyrics, tunings, guitar parts notated in standard musical notation as well as tablature, and suggested chords to use as guides for those wishing to strum along or make their own arrangements. The table below shows the songs which are included in the book. 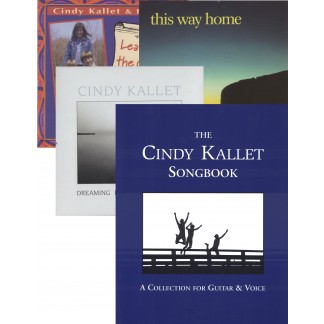