Kallet, Epstein & Cicone’s three CDs, bundled together at a discount.

Cindy would be happy to autograph your CDs. Please specify your autograph wishes in the “Order Notes” field during checkout.

Angels in Daring is Kallet, Epstein, and Cicone’s first recording on Overall Music, featuring their trademark close harmonies on songs both a cappella and accompanied by guitar and hammered dulcimer. Traditional and contemporary music of America and the British Isles, including Cindy’s “Cold is the Night” and Dougie MacLean’s “Ready for the Storm.”

Only Human is the trio’s second recording, again mixing traditional and contemporary, a cappella and instrumental. “…a delightful array of songs drawing from a range as wide as traditional to Bruce Springsteen… I’m a Mammal from which the album derives its title…is alone worth the price of the recording…” (R. Warren, Sing Out! Magazine). “..a warmly healing and elegant sound. O lovers of the human voice, we do recommend this to you!” (Ladyslipper Catalog)

Be the first to review “Kallet, Epstein & Cicone CD Bundle” 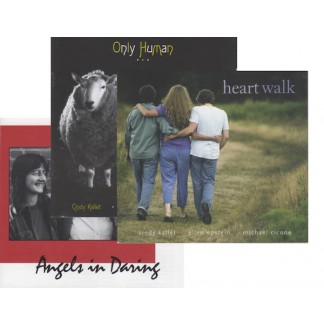