By Grey Larsen – Two physical books, both with downloadable audio

Two books, The Essential Guide to Irish Flute and Tin Whistle plus 150 Gems of Irish Music for Flute, at a large discount off the price of buying the two books individually.

These two books provide the finest in instruction and historical perspective, as well as a strong, classic repertoire of Irish tunes hand-picked for the flute.

Upon request, the author will autograph your books. Please specify your autograph wishes in the “Order Notes” field during checkout.

You may download free audio for these two books here and here.

The Essential Guide to Irish Flute and Tin Whistle has 480 pages, plus 196 tracks of downloadable audio. Over 10,000 copies have been sold. This is, by far, the most comprehensive work on Irish flute and tin whistle playing.

This book has been translated into Chinese and Russian.

150 Gems of Irish Music for Flute has 140 pages, plus 150 tracks of downloadable audio. Much more than just a tune book, this book/audio collection contains 150 traditional Irish tunes, with suggested ornamentation and breathing places for flute players.

All the tunes contained in the downloadable audio files. Also included are three chapters which address Grey’s ornamentation notation system, modes, and breathing and phrasing. While composed mainly of “flute-friendly” tunes, there are also tunes of non-wind origin and tunes that require the use of metal keys. Grey addresses the issue of notes that go too low for the standard Irish flute and options for making needed adaptations.

The author designed the sequence of jigs, reels and hornpipes such that good medleys result when you play consecutive tunes one after another. We’re not aware of tune collections by other authors that offer such medley suggestions.

Many of the transcriptions pay homage to recordings by famous Irish musicians and groups such as Bobby Casey, Dennis Murphy, Paddy Canny and others.

In this book you’ll find:

Here you may listen to some samples from the collection:

Be the first to review “The Irish Flute Book Bundle” 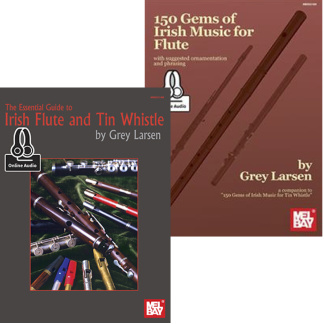 You're viewing: The Irish Flute Book Bundle $67.98
Add to cart