By Grey Larsen. Physical book, 480 pages, plus 196 tracks of downloadable audio. You may download the audio for free here.

This is, by far, the most comprehensive work on Irish flute and tin whistle playing. Well over 12,000 copies have been sold.

This book is also available in a book bundle at a reduced cost.

Upon request, the author will autograph your book, at no extra charge. Please specify your autograph wishes in the “Order Notes” field during checkout.

This book has received many fine reviews.

Purchase this title as an eBook. This link will take you to a Mel Bay Publications webpage. Your purchase of the eBook will be processed by Mel Bay Publications, not by this online store. To continue shopping at this store, use your “back” button, or go to www.greylarsen.com/shop.

We ship physical books from the US, and the cost of shipping to countries other than the US can be rather high. eBooks offer a more economical alternative. Also, in some countries Amazon will print a book-on-demand in your locality, with lower consequent shipping costs.

We are happy to report that well over 12,000 copies of this have now been sold. It has been translated into Chinese and Russian. 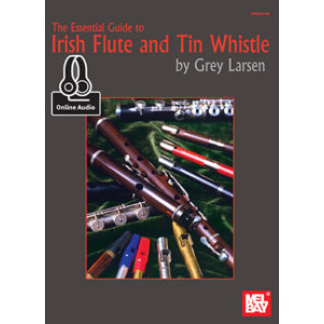 You're viewing: The Essential Guide to Irish Flute and Tin Whistle – Physical Book $44.99
Add to cart