Everything the beginner needs to learn to play the tin whistle (pennywhistle), even if you don’t read music, even if you’ve never played a musical instrument. No stone left unturned.

This book is also available in a book bundle at a reduced cost.

Upon request, the author will autograph your book, at no extra charge. Please specify your autograph wishes in the “Order Notes” field during checkout.

You may also purchase First Lessons Tin Whistle as an eBook. We ship physical books from the US, and the cost of shipping to countries other than the US can be rather high. eBooks offer a more economical alternative. Also, in some countries Amazon will print a book-on-demand in your locality, with lower consequent shipping costs.

Here you may listen to three examples of the audio included with First Lessons Tin Whistle:

There are two supplements to this book:

• Music from First Lessons Tin Whistle
Some of the 23 tunes in the book are notated in one style, some in another. There is good pedagogical reason for this. However, here you can have all the music notated in one consistent method: standard music notation, tablature or suit code. Audio files are included.
The tablature and suit code versions are available in six note-naming systems from around the world: US (Latin Alphabet), Sargam, Jianpu (modified), German “H” Nomenclature, Fixed Do Solfège (Tonic Sol-Fa) and Movable Do Solfège

You may also enjoy some free downloads related to this book. 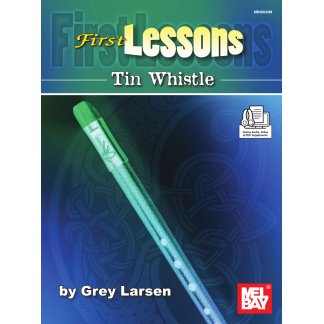